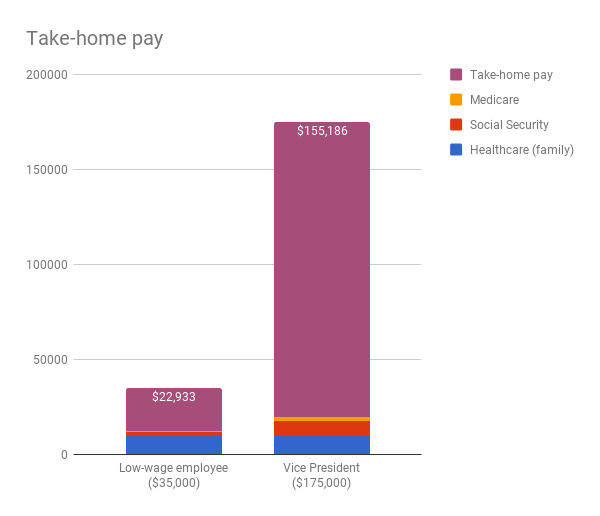 Both pay the same costs for Guilford’s healthcare. For an employee supporting a family, that will be $9390 next year. That cost is fixed, and therefore regressive by income. Social security tax is capped, making it regressive at high incomes, so high-wage earners above the cap actually pay a lower percentage than lower-wage earners. The VP pays more Social Security tax in total, but at a lower rate. Medicare is a constant proportion (not capped, so neither progressive nor regressive).

If we add another constant fee, say $120 for parking for the year, that money comes out of the take-home pay. The fee is the same for all employees, so that fee represents about half a percent (0.5%) of the low-wage earner’s take home pay, while it makes up less than a tenth of a percent (0.08%) of the VP’s take-home pay. By comparison, Medicare taxes are 1.45% of salary, or ~2% of take-home.

In other words, a flat $120 annual parking fee has an impact as much as seven times as great on our lowest-paid employees as on our highest. That’s textbook regressive. It represents about ten and a half hours of work for the low-wage earner, given directly back to the college, and only one and a half for the VP.

We can do better. For that matter, we should do better with our health insurance also.