I’ve heard from several places on campus that we shouldn’t be comparing faculty salaries to AAUP IIB when we look at percentiles for faculty salaries. I think that’s a perfectly reasonable question to raise, although I’m not sure I agree. We want to compare ourselves to institutions like ours when we try to figure out where we are. However, we should be sure we’re changing our peer group because it’s actually a closer peer match, not just so our numbers look better, and if we’re going to consider changing the comparison group for faculty, we should also change it for staff and administrators.

One group that’s been suggested by some is colleges in North Carolina that are four-year private colleges that don’t offer graduate degrees. One problem is that there aren’t many such colleges in the state, so it’s not a large group – less than 20 – and some of them are very unlike Guilford in terms of size, budget, student preparation, and mission. Most are much smaller, have much lower budgets and endowments, and have a significantly lower preparation level for incoming students. However, if we use this group for faculty salary comparisons, our salaries are often in the top half of the list, and in some categories higher. This is a point made by an anonymous commenter to our page for the forum on a salary policy. A later anonymous commenter provided a link to data:

I am not sure where Anonymous at 4:53 is getting their information but looking at the AAUP salary data http://chronicle.com/article/2013-14-AAUP-Faculty-Salary/145679#id=table

I did some further research using IPEDS data, which is a government database that collects information from colleges and universities. It is not without its problems in terms of consistency of reporting, but it’s at least a baseline comparison. I tried to look at how much of a priority faculty salaries were at each North Carolina baccalaureate institution in their budget, and this is the comparison I came up with: 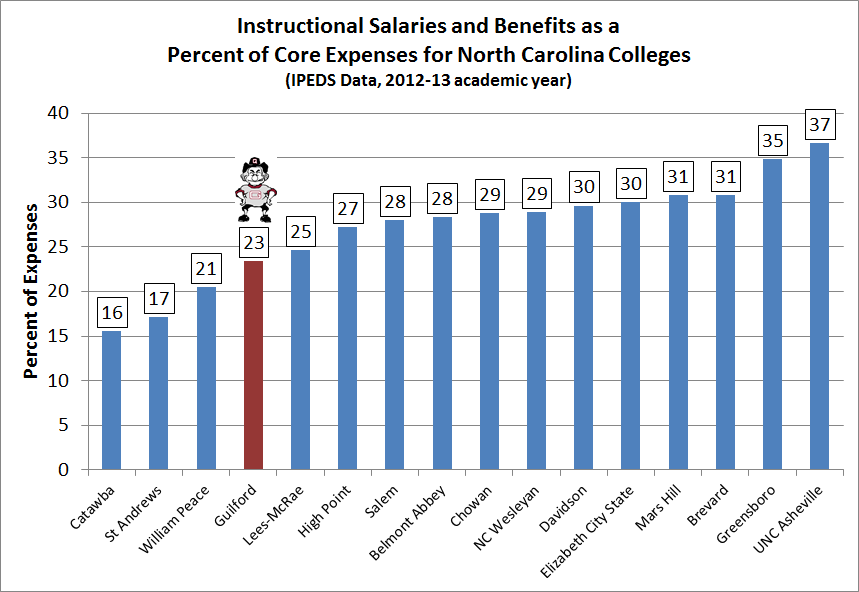 As you can see, Guilford is at the lower end of North Carolina colleges in terms of percent of overall budget spent on instruction, which seems to me to support the idea that regardless of comparison group, we have prioritized faculty salaries at a lower level than other colleges. If we spent 28-30% of our total budget on faculty salaries instead of 23%, our faculty pay rates would have met the 50th percentile goal compared to AAUP IIB that we’ve put in our strategic plans.

That’s not to say that this would have been possible, or smart, or that staff haven’t also suffered from low pay, but numerically, it is interesting.