Many of you have probably heard that a relatively nearby small liberal arts college, Sweet Briar College, is closing after this year due to declining enrollments and financial problems.  If you want a summary, see this article from Inside Higher Ed.

This is clearly a drastic solution to this kind of problems, especially as they had an endowment of comparable size to ours. I was curious on hearing this how parallel our situations were, so I did a little comparative digging.

On the one hand, we are totally Sweet Briar. Our traditional enrollments have dropped 20% over the past five years, while theirs dropped only 10%, and our CCE credit hours have dropped by 45%. Our traditional discount rate has climbed from 43% to 53%, and theirs climbed from 49% to 62% over the same period. Our student problems are worse, our discount problems are better, but still very similar.

So what made them decide to throw in the towel, especially when they still had a large endowment? What does that mean for us? Well, on the other hand, we’re not Sweet Briar. It’s hard to get a handle on their budget deficits exactly, but they must have been large. For example, here are some graphs of IPEDS data from recent years with comparison to Guilford: 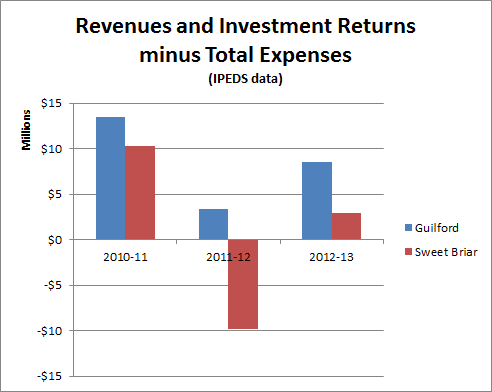 This is all the money they made from revenue and from investment on their large endowment (currently over $90 million) , minus their total listed expenses. If these numbers are right, they had a $9 million loss in 2011-12. This could be related to a building project or something big rather than systematic losses, but it’s still a big number. 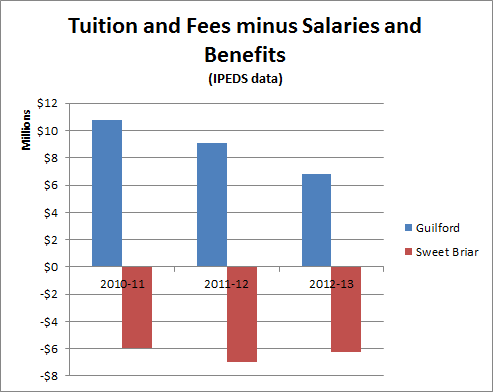 This is the bigger problem. Sweet Briar looks like it is tuition dependent like we are (maybe not exactly to the same degree, as their budget is 2/3 ours and their endowment is a little bigger, but it’s close). However, their spending on salaries and benefits is close to ours. The graph above looks at the difference between tuition and fees revenue and salaries and benefits, and you can see that Guilford is still positive (though shrinking), while Sweet Briar was spending a lot more on its work force than it was bringing in through tuition. That looks a lot like they had no path to sustainability, and were probably looking at a short future where they spent out the endowment in deficits over the course of maybe a decade.

Grim stuff – I think we’re not where they are, by a long shot, but we’re on the road that leads the same place. Time to change course.